Be amazed when you give your kids money power 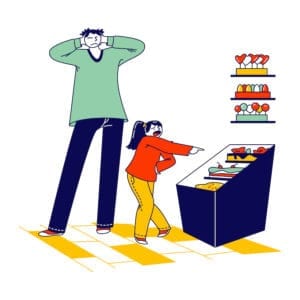 What kid doesn’t want money? Kids see parents spending money with no one telling them what to do. Looks like power to them and they want it. What happens if you give your kids money AND power. You’ll be amazed!

Parents, with all good intentions, don’t want their kids to make spending mistakes. Parents know the disaster that awaits. However, that’s an adult experience.

Kids can’t hurt themselves (or their future credit rating) when they make a kid-size mistake. So why not give them money to manage and the control and power to make their own choices?

Before I started allowances with my kids I knew what I did not want my kids pleading with me to spend money on them.

Kids learn quickly that begging works, especially when making a scene in a store. With my kids, there would be enough things to struggle over in their childhood; money was not going to be one.

As a result, I decided to give them money, total autonomy, along with spending responsibilities as they grew. My kids now had that money power they wanted. What they and other kids do with money power amazed me, and will amaze you too as a parent.

The solution is to give them an amount of money they can control completely on their own. One easy way to test the power of this solution is with a travel or entertainment fund.

Here’s what some kids did with their money power.

A 5-year old shopping with her mother begged for her to buy a toy at the store. Mother reminded her that she had the money in her no-cash allowance account. Girl looked at her and said, “No way. I’ll save my money and buy something even better”

Teenager went to camp. Her mother said she’d split the cost of a camp sweatshirt. When she got home she told her mother that she decided she didn’t really want to spend her money on a sweatshirt.

An 7-year-old with his no-cash allowance account went shopping with dad. When he could find anything he asked to go home. “I don’t have enough money,” he said.

Teen wanted to buy fashion boots. Her mother reminded her that parents only bought weather-type boots and suggested the girl save her money. When she had enough her mother offered to take her shopping. Teen  said, “I’ve decided I don’t want to use my money to buy those boots.”

Whose money is it?

If the money belonged to mom and dad we know the result might be different. However, when kids truly own their money, they use their power and control to make good choices for them. That is the essence of responsible money management.

What do you think might happen when you try this with your kids?